Signs that the economy is starting to gain confidence is showing in the January figures for UK house prices.

The General Election seems to have had a positive impact on the UK housing market which saw asking prices hike by 2.3%.  Rightmove, made a study of 65,000 properties and noted an average price rise of £6,785 between mid-December and mid-January, making the average asking price £306,810 – the biggest monthly spike ever recorded for this period.  These results show an increase of 2.3% on the previous month and 2.7% on the previous year.

New buyers are also on the up with a 15% rise in enquiries to estate agents at 1.3 million as opposed to the same period last year and there was also a 7.4% increase in the number of these enquiries that resulted in an agreed sale.

Miles Shipside, director and housing market analyst at Rightmove, said “these statistics seem to indicate that many buyers and sellers feel that the election result gives a window of stability”.

“The housing market dislikes uncertainty, and the unsettled political outlook over the last three and a half years since the EU referendum caused some potential home movers to hesitate,” he said. 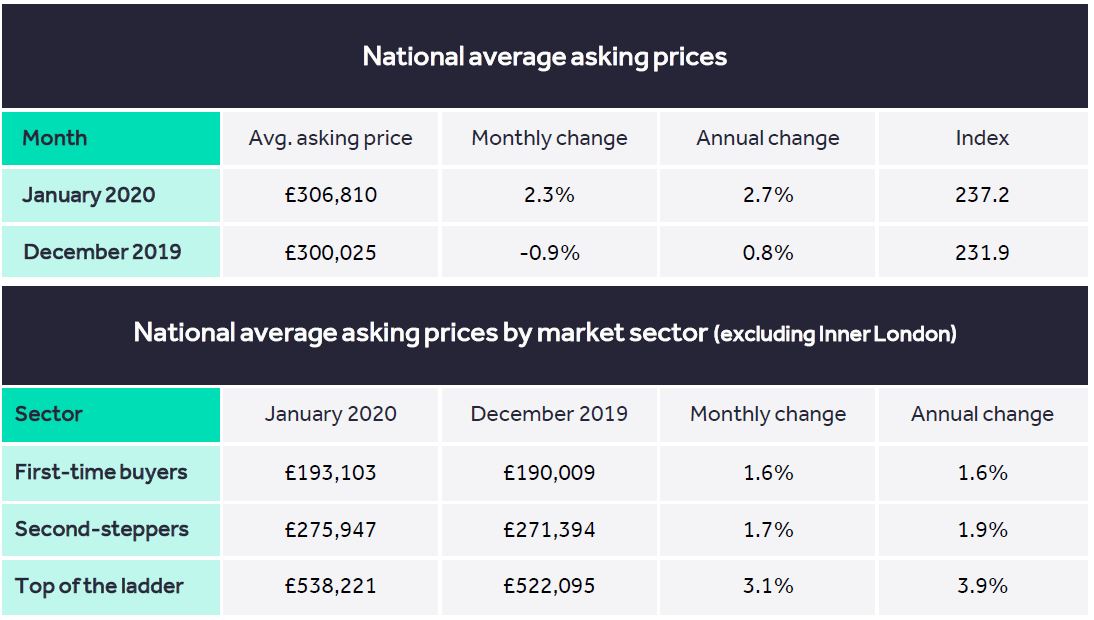 “Whilst a substantial rise is the norm in January, buoyed by the start of a new year, this is the biggest new year price surge that we have ever recorded.”

Mr Shipside said that while there might be “more twists and turns” in the Brexit saga, there was now an opportunity for sellers to get their property on the market for a spring move unaffected by Brexit deadlines.

“There now seems to be a release of this pent-up demand, which suggests we are in store for an active spring market. The early birds are on it, with over 1.3 million buyer enquiries to agents since the election,” he said.

He added that first-time buyer activity has remained strong, helped by low interest rates and high rental costs.  The downside for the buyers is that the demand has led to an increase in price with the average price of a typical first-time buyer property hitting a new record high.  “However, the annual rate of increase remains fairly modest at 1.6%, less than the rate of growth in average earnings, so affordability has actually improved a little for first-time buyers”.