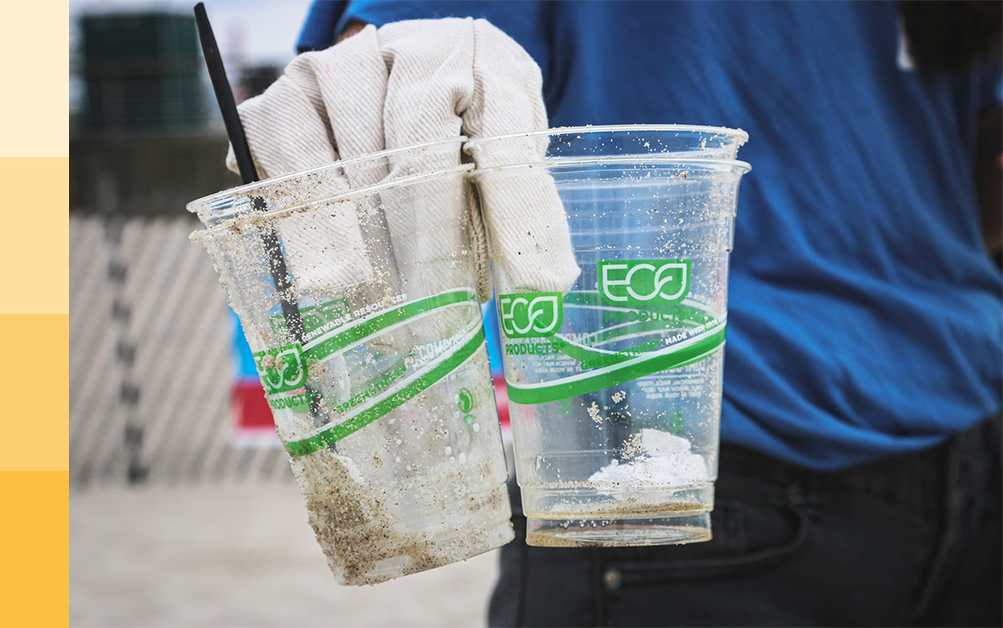 Global warming is becoming increasingly prevalent and the collateral damage caused by pollution is showing adverse effects on global temperature, our environment and the surrounding wildlife.

Recent studies by National Geographic state that around 18 billion pounds of plastic travels to the ocean each year from coastal regions. This is the equivalent to five plastic grocery bags sitting on every foot of coastline in the world. Over 40% of plastic waste collected is commercial packaging which was briefly used once and then immediately discarded.

These alarming statistics have triggered a ripple effect through various communities across the globe, from conservation organisations to corporate chain brands. The construction sector has recently jumped on to the trend, taking a huge step away from the typical waste production that is so commonly seen throughout the industry.

The National Bureau of Statistics said that reports in February 2018 for UK Statistics on Waste found that in 2014, the UK generated 202.8 million tonnes of waste. Construction, demolition and excavation (CDE) was responsible for 59% of that figure.

A company which optimizes plastic waste to surface roads has launched the first of many factories in Dumfries and Galloway. The MacRebur plant in Lockerbie will use rubbish which would have gone to a landfill for the production in asphalt levels.

To put the effect of these plastic roads in to perspective, a one-kilometre stretch of road made with this environmentally friendly mix would use the equivalent of about 684,000 plastic bottles or 1.8m single-use plastic bags.

Chief executive, Toby McCartney, said: “Our technology means that we can not only help solve the problem of plastic waste but also produce roads that cope better with changes in the weather, reducing cracks and potholes.

“That’s because our roads are more flexible thanks to the properties of the plastic used in them, so although a MacRebur road looks the same as any other, it has improved strength and durability.

“Our technology also means there are no plastic micro beads present in the mix and we can even recycle the road at the end of its lifespan, creating a circular economy that is sustainable and cost effective.”

The way that plastic waste affects our planet is slipping increasingly further beyond our control. With solutions in place such as this one, progression will be made to prevent any drastic climate changes in the future. Repurposing waste for plastic roads is an innovative idea that will vastly adapt the levels of pollution and improve the construction industry’s beneficial impact on the environment.

Following this, a new plastic road has been transformed into a new cycle lane in the UK, produced with a plastic based asphalt which was supplied by MacRebur. This material is proven to be more durable and flexible to the UK’s ever-changing weather conditions, making it less likely for the road to become cracked or damaged.

The Balfour Beatty Senior Construction Manager, John McKay, said: “Throughout the project, sustainability played a vital role in the choices we made. Finding a material which not only saved plastic from landfill, but which could also be recycled again at the end of its life, is the ultimate sustainable solution.”

He continued, “We are proud to have taken an innovative approach to sustainability and ultimately offer a more sustainable yet practical result to the community for their new cycle lane.”

Plastic bags are something that are used on a daily basis and thrown away on a daily basis. Their lifetime can stretch up to 500 years, and they are only used for an average 12 minutes of that time.

This new cycle lane prospects a greater future for the eco-friendly approach which is currently taking the industry by storm. This fresh approach to cycle lane construction not only uses recycled plastic, but also promotes a healthier, cleaner mode of transport which would also have a positive impact on the environment.